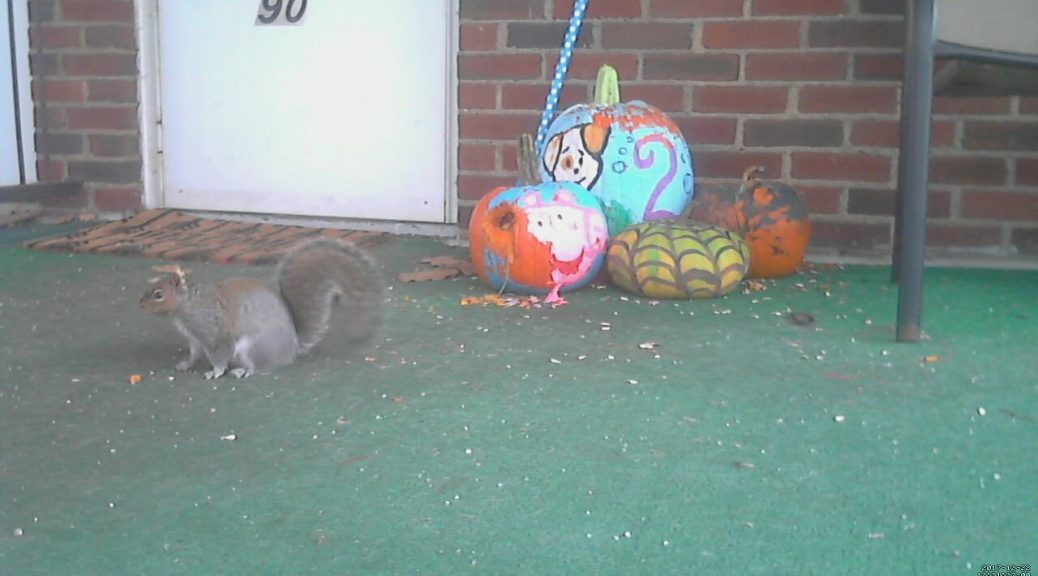 This morning I awoke and discovered that our local neighborhood squirrels have been attacking our pumpkins that have been on the porch.  Not that it is a major concern, squirrels need to eat also, but this lead me to today’s project.  Today I decided to create the squirrel cam.  Most of the functionality was already widely available, the only major thing was putting it all together.  Most of the parts for this were just laying around not being used, but I’m running out of Raspberry Pi’s to use in these projects.  Between replacing multiple machines with one, running the 3-D printer off another, RetroPie/Kodi setups, I only have a Pi Zero W remaining.  I think I’ll have to find a way to rectify this at some point.  Anyway, back to the squirrel camera.

My first attempt at making this work involved only printing the webcam mount. This failed almost immediately when I attempted to put it on the tripod plate.  The screw hole immediately stripped out and would not stay attached.  With that, I then moved onto Plan B.  A bit more involved than simply printing a mount, I was able to take the mount STL files, and using TinkerCAD, remix it with a snap together “Simple Raspberry Pi 3” case, to create a case with a built in mount. Admittedly, my remix could have been done better, but I was in a rush after being frustrated by the stripped screw hole. Fair warning, the case requires a bit of clean up and has a lot of support structures, but it fits and does the job, so it is a partial win.  At some point I’ll redo it so it is prettier, and prints with less support, but for now, it’ll do.

Next up was getting the software installed to the micro SD card.  Raspbian Stretch Lite was my choice to use.  Burn the image to the micro SD card in whatever way you want.  Since we are going to be running the Pi headless, we need to enable SSH access before we boot the Pi.   With all versions of Raspbian since Nov. 2016, ssh access is disabled by default.  The way to enable it, without a display, is to create a file in the boot partition named “ssh” without quotes.  This will allow us to access the pi over the network and proceed with the rest of the configuration.

Once we are connected to the network with the Pi, we will update the OS, and then install all the needed software.  This Pi will be running a program called motion, which will take pictures automatically when enough pixels change in the image.  Ideally, this won’t cause unwanted images to be taken since I decided it will also be a Twitter bot, tweeting the images whenever a photo is taken.

Up next, we will install motion.  I followed a very straightforward guide, located here.  I followed along until the part where it describes adding network storage to the mix as the sd card available to me was large enough to not worry about that.

Next was deciding on how to post the photos that were taken to Twitter.  This created an issue as I have never tried to run a Twitter bot before.  A little bit of research later,  and I found an easy to run twitter bot here.  I love Github.

One key thing I found with the bot though is that the starting tweet number has to be set.  It didn’t want to default to 1 on the initial run, causing errors whenever I tried to start it.

Following the instructions in the readme file, I set up Twitter API access, plugged in the required information, ran the script once with the –tweetnumber variable set to 1 and success!  The pi tweeted on its own.  Next up, configuring cron jobs to run the script at regular intervals.

For this,  I chose to have the script run every 5 minutes.  Many walkthroughs exist for setting up cronjobs so this will not be covered.  Lastly, we put it all together and set it up.  The Squirrel cam is tweeting at @TLPorchCam

Things I want to change:

Make the squirrel cam tweet the most recent image if it hasn’t been posted previously.  The bot I used just picks randomly from the folder, without regard to the most recent.  I guess eventually the pictures will get posted, but it isn’t the most effective way in my mind.